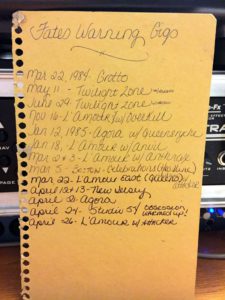 -Brooklyn 11/16/84 (Probably the L’amours show where they opened for Overkill.)
Intro: (Pirates Of The Underground)/ Buried Alive, The Calling, Without a
Trace, Night On Brocken, Shadowfax, Kiss Of Death, Damnation, Misfit, Kyrie
Eleison

The Keg House in New Haven, CT was a 1984 gig.
I know for sure Brian Slagel was there that night.
I believe Liege Lord also played.

From Victor Arduini, this is a flyer from a show on May 11, 1984. According to Victor, this was their second show, but the first one with the band name Fates Warning.