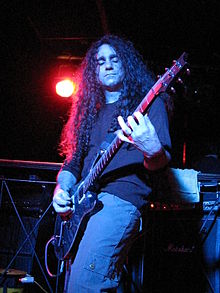 Jim Matheos is the legendary founder of the Progressive Metal band, Fates Warning. In 2015, not only is Fates Warning doing the 2nd North American leg in support of their latest 2013 album Darkness In A Different Light; they are also re-releasing their 1997 concept album, A Pleasant Shade Of Gray. This is a short but sweet interview conducted this week.

That Drummer Guy: With Darkness In A Different Light being released 2 years ago, how is the album holding up for you now?

Jim Matheos: Fairly well. As with everything I’ve done, it’s hard for me to listen objectively without being overly critical and second guessing every decision. So there are things I would do differently given another chance. But, overall, I’m still happy.

TDG: Since this is will be the 2nd leg of the American run for the Darkness In A Different Light tour, will be any significant changes in the songs that are played live on this run?

JM: We’re still about two months out from the tour, so I haven’t given the set list any thought yet. It will probably be similar to what we’ve been doing recently, with a maybe a few different things thrown in for those that came out last time.

TDG: What songs, newer or older are still fun for you to play live?

JM: So much of that depends on the response, really. If the people are really into it, then something that I’ve played a thousand times, such as The Eleventh Hour, is exciting and fresh. Typically though, the more challenging material, or songs that I really connect with emotionally are fun to play no matter what.

TDG: So what brought on a re-release of A Pleasant Shade Of Gray?

JM: We’ve been releasing special editions of the back catalog for some time now. We try to put one out every couple years or so. We’re going in chronological order and APSOG was up next.

TDG: How do you feel A Pleasant Shade Of Gray has held up over these past 18 years?

JM: I’ve had to listen to it a lot over the past year getting this re-issue organized. For me, it’s held up remarkably well, which is not something I can say very often.

TDG: A Pleasant Shade Of Gray has been known to be played live in it’s entirety in the past. Would that ever be happening again in the future?

JM: I’d like to. The tours we did for APSOG in 97-99 were some of my favorites. It’s a fairly challenging piece, particularly when you’re playing the whole thing in sequence without a break. Unfortunately, because of that, it’s not something we can just throw together and bring out on the road. We will, of course, be doing pieces of it on the upcoming US tour.

TDG: A Pleasant Shade Of Gray brought on the first full appearance of Kevin Moore into the band in a recording sense, would there ever be a chance of Kevin joining back in for any future FW releases?

JM: Actually, Kevin’s first FW appearance was on At Fate’s Hands, from the Perfect Symmetry album. Once he and I started doing OSI I thought it would be best to not have him involved with FW in order to keep the two entities completely separate. But I always love his contributions, so I wouldn’t rule out a future appearance.

TDG: On a related note, is there any chance of any new OSI albums in the future?

JM: I would love to do another OSI at some point. But, both Kevin and I are busy with other things right now, so, unfortunately, there’s nothing on the horizon.

TDG: With work with former Fates Warning vocalist, John Arch would there ever be the possibility of working with Arch on a new Fates Warning album? Possibly with Arch and Alder sharing vocal duties?

JM: I’ve thought about that and it’s something I’d be interested in. I’m not sure how realistic an idea it is though. Fans tend to be very polarized on this issue, preferring one and often disparaging the other, which is an attitude I can’t understand. So, in reality there would probably be way too much drama involved, from the outside- not the inside, and that’s something I like to steer clear of.

TDG: Is there any talks of another Arch/Matheos album?

JM: As with OSI, John and I are busy with other things, so nothing in the works right now. But I was very happy with that record and the fan response was amazing. John is always inspiring to work with, so I’d love to at some point.

JM: I’ve been writing this year, so hopefully we’ll have some news soon.

JM: These are always labors of love, so they’re few and far between. At some point there will be another. Can’t say when though.

TDG: Is there any new music or bands that you have been enjoying lately? Any current favorite albums of 2015 so far?

TDG: Thank you for taking the time to do this interview. it has been a tremendous honor to ask these questions.

This site uses Akismet to reduce spam. Learn how your comment data is processed.